You might remember that when I was planning this round the world trip, there were two things I knew I had to see before I even picked up a guide book for research purposes. The first was Machu Picchu (check) and the second was the Galápagos Islands. Around seven years ago, my sister and I travelled to Ecuador as part of a bigger trip including Venezuela and Brazil, but our funds wouldn’t stretch to the islands…so I knew it was a must this time round.

So, before we leave for the islands, I have a couple of days recovery time in Quito after a rather large ‘Farewell Bolivia’ party. I am travelling to the islands with a company called G Adventures, they organised our Inca Trail trip and did a rather good job…so I figure I am in good hands.

As I’ve learnt, day one of the trip always means meeting the group in the hotel the night before the off. When I walk into the room, I am surprised to see how diverse the age range of the group is. The nearest to me is English Matt in his early forties, but the eldest people are an American couple from St Louis called Pat (89) and Betty (85) In between, there are some lovely couples, mostly retired, including Anne and John from Toronto, Barbara and Colin from Toronto plus Mike and Janet from Birmingham. So, I figured, is wasn’t going to be quite the party cruise…however at the last gasp, two thirty-something’s Nick and Jo walk in the door late to the meeting. Hurrah! Now don’t get me wrong, I can relate to people of any age, but of my many interests on vacation, going to bed at 10pm isn’t one of them especially when there is paradise to be enjoyed.

The next day is my birthday, and what a way to spend it…en route to the most beautiful place on the planet. The other excitement is that Quito is opening a brand new airport and our flight will be one of the first out of it. So after the 1.5 hour journey to the airport, rather amusingly, a news crew follows us through check-in interviewing some of our group along the way. Due to my line of work, I find the whole thing rather entertaining watching the news anchors preparing for their live broadcasts when the first flight leaves. It turns out broadcast journalists are the same the world over. 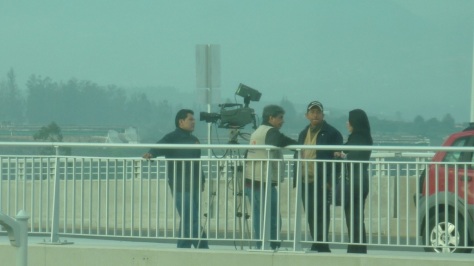 On arrival, we’re greeted by this hugely encouraging sign

So it looks like we are set for delays. It’s quite exciting being the first in the airport though. Matt uses some sort of snazzy card to get four of us into the VIP lounge where we gorge ourselves on teeny tiny savouries and fresh fruit juices (no champers as it’s 8am!) we mark this historical occasion the only way we know how 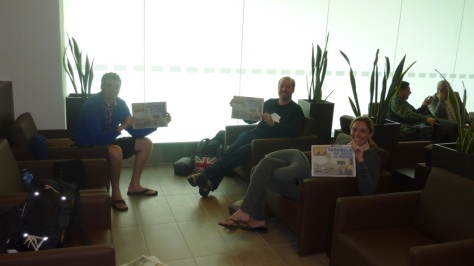 After a few false starts, and our body weight in pastry, we’re finally off to San Cristobal on the islands via Guayaquil.

At the airport on San Cristobal, we are joined by another four guests destined for our boat, Aussie Claire, who is to be my cabinmate, Swiss Andy (dead ringer for Roger Federer) and two Finns who collectively bring the average age down significantly.

Here comes the science bit…the Galapagos Islands are an archipelago of volcanic islands distributed either side of the equator approximately 926km from Ecuador, of which they are part. There are 18 main islands, 3 smaller islands and 107 rocks and islets. Charles Darwin visited here in 1831 during his second voyage on the Beagle, and his learnings formed his theory of evolution which he published thirty years later Origin of the Species. Many of the species found there are endemic, that is to say they can’t be found anywhere else on the planet.

Our first stop is to a tortoise sanctuary to see some of Lonesome George’s cousins in the wild. They really are remarkable creatures, and very much a sign of things to come

Afterwards, we make a mad dash to the local shop to stock up on champagne and rum. Before long, we’re in a zodiac travelling to the G4 boat called ‘Xavier’ in Puerto Ayora which will be our home for the next four days. We meet the crew including Wilo, our naturalist guide, and Wilmer, our bartender, and then we have dinner together. At the end, they bring out this huge birthday cake for me which was so very sweet and unexpected. Champagne, cake and the Galapagos Islands…not a bad way to start the year

And so, life on the boat takes on the rhythm of breakfast, island exploration, snorkelling, lunch, lounging, snorkelling, sunset with piña coladas, dinner, drinks on the deck…and repeat. Each night Wilo gives us a brief for the next day’s activity, the key info here being what footwear we’ll need for a dry or wet landing and what we should expect to see wildlife-wise. Other than that, assume factor 50, bottle of water and camera. I should say at this point that we saw so much more wildlife than we ever expected, we had lots of sightings that were remarkable even to Wilo…so we must be a lucky lot.

Day 1
We head out to zodiac around Santiago where we spot our first Galápagos Penguin (first solo, then a fleet of them swimming together) Wilo tells us how rare it is to see this. Later, whilst walking on Chinese Hat island, we also see incredibly colourful crabs, sea lions, a blue footed boobie, iguanas and a Galapagos Hawk. The latter is ready for his close up, and doesn’t even flinch as we snap away in front of him. We take a snorkel by Santiago and swim with Marine Iguanas, Parrot Fish, Surgeon Fish and Golden Rays. 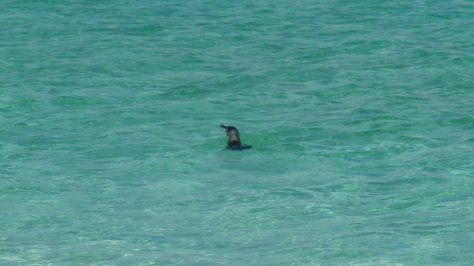 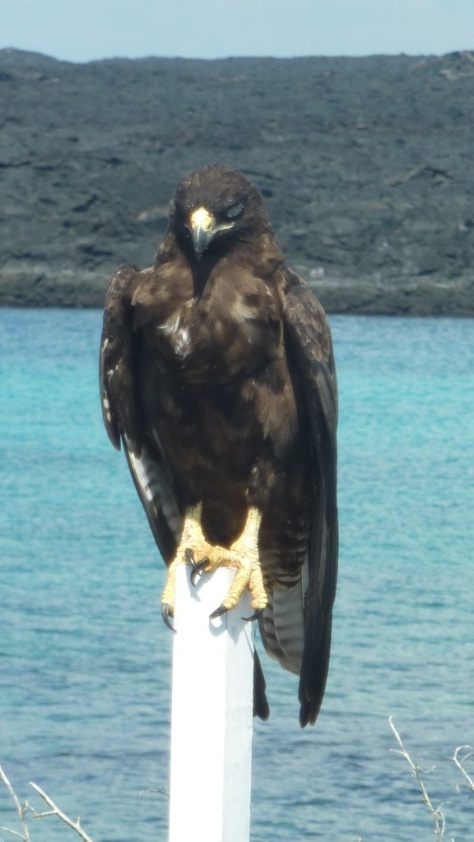 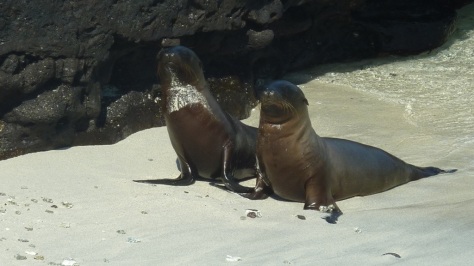 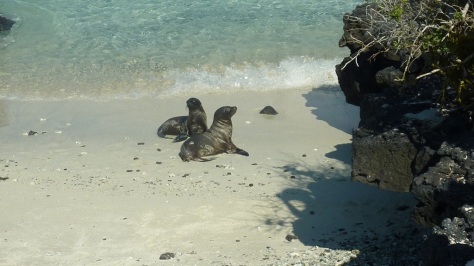 In the afternoon, we head out in the boats to Black Turtle Cove for our first sightings of the Pacific Green sea turtles. It’s mating season, and I’m afraid our presence does not put them off their four to six hour sessions at the top of the water. It’s quite a slow show!

Wilo is a great guide, and he really opens up to us about his life. His mother had always wanted him to be a guide, and she had passed away before he qualified. So this place is very special to him, and it really comes across.

On the way back to the boat, a bigass wave approaches us soaking everyone and everything in the boat including my camera…which ceases to be. In a place as entirely amazing as this, it is hard to be upset. I take it much better than I would had disaster struck back in London. I even surprise myself with how laid back i seem to be about it. The worst thing will be not being able to take photos in the most beautiful place on the planet, but I will need to rely on the kindness of others. Everyone promises to share their shots with me. A moment’s silence please for the last shots captured by the Panasonic Lumix DMC TZ7… 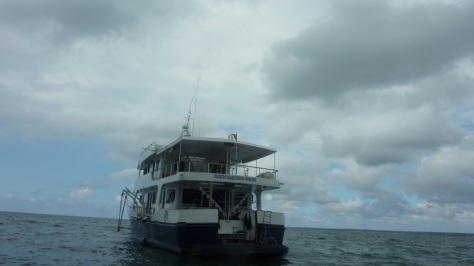 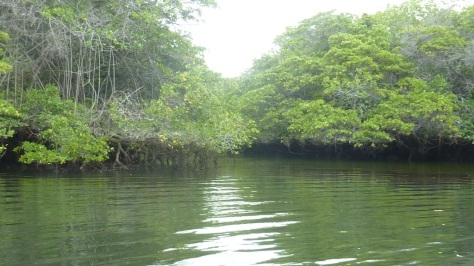 To be continued once I have everyone’s photos. It is such a visually stunning place, I just can’t put you through a blog without any images. Hold that thought…