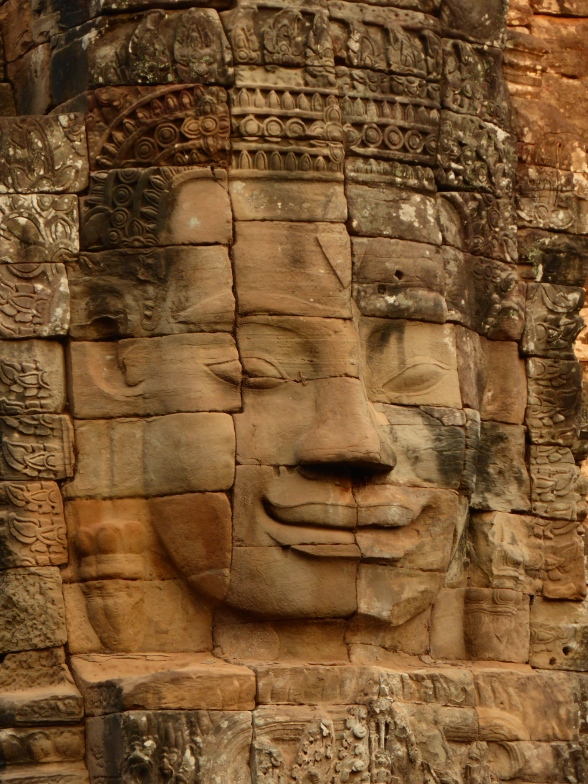 Some things in life grab you and you’re instantly touched by their beauty, like the opening bars of Corsicana by The Antlers or the smiling face of a friend meeting you at the end of a long journey. Angkor Wat is one of those things, and my first experience of it is at the break of dawn.

Whilst also shorthand for the dazzlingly impressive 300 kilometre squared temple complex which sits valiantly astride the Tonle Sap river in northern Cambodia, Angkor Wat is also one of the largest temples on the site, built of sandstone and laterite in 1150 by King Suryavarman II of the Khmer empire for the Hindu god Vishnu. And it’s here that we start.

After whizzing through the streets of Siem Reap at 5am in a tuk tuk, we are now stumbling in pitch black along the moat over the river through entrance gates and over stone steps which we can’t even see. We’re not alone, the respectfully quiet chatter around us implies that we’re amongst hundreds of people making their way to the well documented vantage point to watch the sun come up over Angkor Wat, their darting torch beams the only thing keeping us from falling over.

We follow the masses and exit the causeway, ending up next to a lake on the – of the site. It has rather a communal festival feel with groups cross-legged on the floor chatting. As we wait for first light, the chatter dulls and quietens, and slowly the rising sun (albeit shrouded in wispy cloud) reveals those unmistakable and majestic corn-cob towers atop 1500 metres squared of intricate brickwork.

And suddenly all at once we feel like we’ve been here a thousand times over.

After we’ve taken it all in from a distance, Bette Midler style. We leave the throng at the lake, all draped over the library temples like they were built to take selfies on, and head for the temple.

It is said that Angkor Wat took thirty years to complete, and you can forgive the slow workmanship when you get closer. Every nook and cranny boasts such fine detail, with each turn a new feat of crafstmanship surpasses the last. Its 3rd enclosing wall is embossed with a series of bas-reliefs, a particular kind of sculpture designed to be viewed from many angles without distortion.

Scholars have ruminated that this particular temple was built for funerary purposes since its bas-reliefs are meant to be viewed anti-clockwise, a direction that was associated with death in the Khmer empire.

We walk round the walls taking in each gallery depicting battle scenes and tales from Hindu mythology. 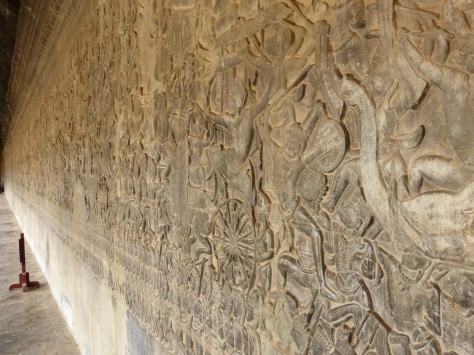 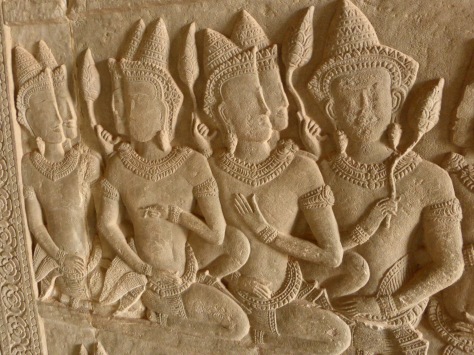 These were once embossed in red and gold, but it has worn off from thousands of hands caressing the complex and detailed stonework. Two of the most famous are the Heaven and Hell gallery, and The Ocean of the Churning Milk.. The latter is concerned with the life story of Krishna, one of the avatars of Vishnu. In it the devas (gods) and asuras (demons) line up against each other trying to churn the ocean to make amrita (the elixir of immortality.) I’ll tak a cup o’ that.

The pyramid at the heart of the temple is triple tiered. Up one level is the Gallery of a Thousand Buddhas, or it was until large numbers of the statues were removed for conservation and the remainder were destroyed by the Khmer Rouge. We’re invited by a local to light incense and give thanks to Buddha by kneeling, clasping the incense between our palms, holding it to our foreheads and bowing three times. It’s a lovely, peaceful moment, but the bubble bursts almost immediately when the understandably industrious Cambodian invites us to donate $20 ‘for good luck.’

Nearby the Chamber of Echoes is a place where sound reverberates if you stand with your back to the wall and thump your chest. This what the locals do, three times, for good fortune. This time for free.

In the same cloister are the old library buildings and the south west and south east corner of the complex. 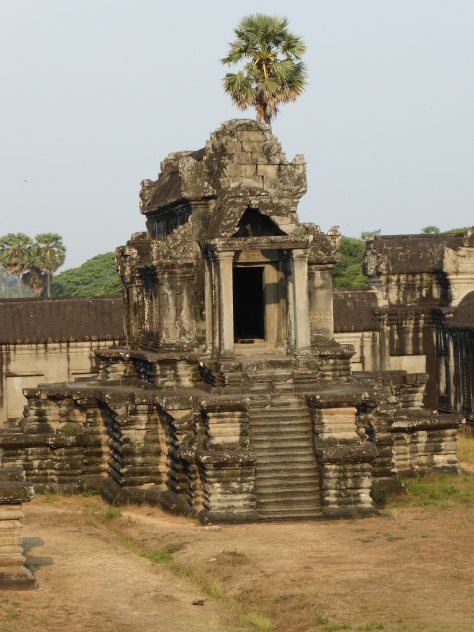 Up another level is a stunning frieze of apsaras which are spirits of the clouds and waters from both Hindu and Buddhist mythology,  the emblems (and poster girls) of this beautiful country. 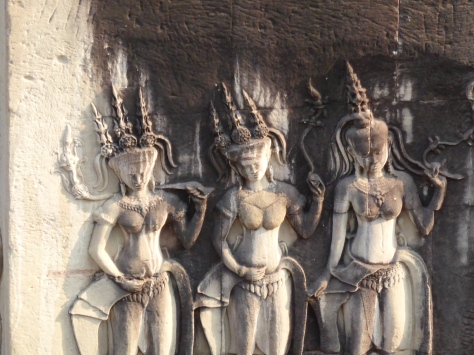 It’s a steep climb to the third and final level, which only the high priest and king would have been allowed to visit in Khmer times.

Here, your flesh will need to be covered to within an inch of its life to observe the tradition respectfully, a scarf over the shoulders won’t do. But, after the climb, in the excruciating heat, we are very much rewarded. The views outward are of the dense forests and rice paddies, the sheer scale bringing your jaw to a slack position. 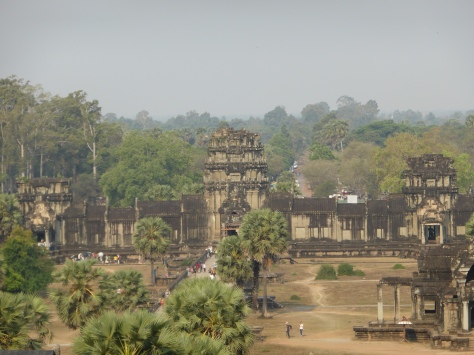 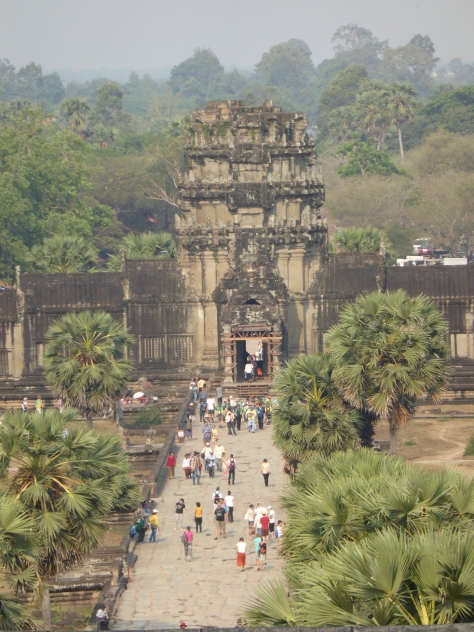 The views inwards are just as gratifying.

Beautiful courtyards giving way to the 65 metre corn-cob towers themselves.

If you can squint long enough into the debilitatingly hot sun, you’ll see garudas (large mythical birds), nagas (serpents) and apsaras (poster girls) on every inch of every spire.

On the way out at the gates, we stop in at the statue of Vishnu resplendent in saffron. 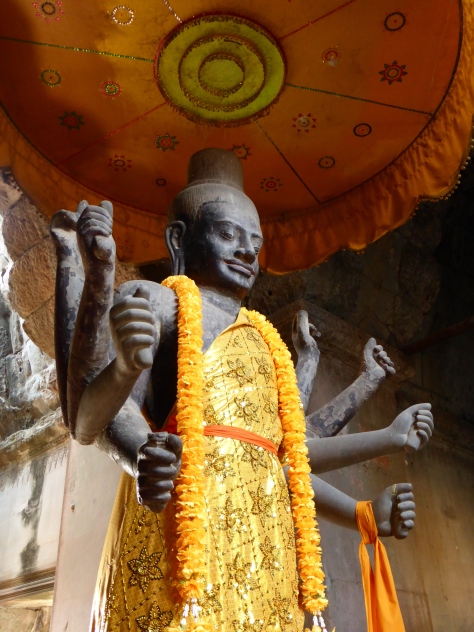 Sounds just heavenly doesn’t it. Well, it does have its downsides. We are harangued relentlessly by local vendors to eat and drink almost constantly when outwith the enclosure walls. That I can deal with. The fact that they are all named Harry Potter, Lady Gaga, 007 etc, I can’t.

This could indicate numerous things; that Western tourists are so lazy they can’t remember a Cambodian name, that they’re so oblivious they can’t identify someone they just had a conversation with or that they are so xenophobic that the moment they see something which connects them to the part of the globe that they can relate to more closely they are so giddy with excitement they’ll by a $2 dollar Coke. Or all of the above.

We beat a hasty retreat after this due to the searing heat, returning the next day in late afternoon to the Angkor Thom complex and specifically the Bayon.

When we reach there, a production team are setting up for a film shoot which is not uncommon here (parts of Tomb Raider were filmed at nearby Ta Prohm…of which more later.) In front of the temple, flight cases are lined up and lighting rigs are being assembled around us.

But within the enclosure walls and away from the melee, we see the temple in all its uninterrupted glory. In this lower light, the setting sun seems to turn the stone pinkish in this dusky hue. It’s a beautiful time of day to see it.

The eye is drawn immediately, and mesmerisingly, to the temple’s unique selling point (marketing speak people…bathe in it) which is 216 faces carved into the temple’s 54 stone towers dominating the view from every enchanting angle.

Some claim that these were modelled in the image of the ever modest Khmer King. Others say that it is the image of Loveskara, meaning ‘Lord of the world’, the bodhisattva said to encompass the compassion of all buddhas in Mahayana Buddhism. 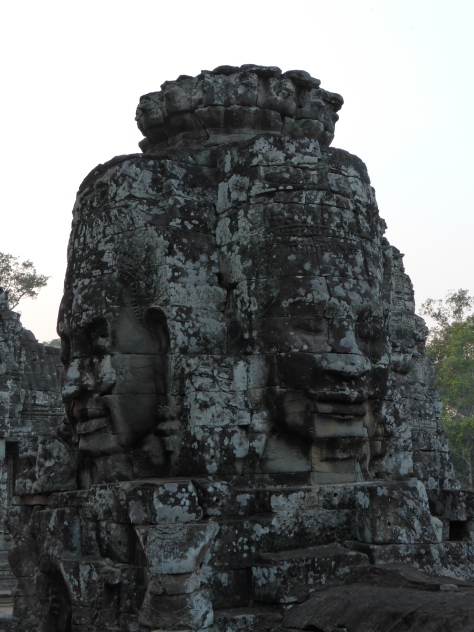 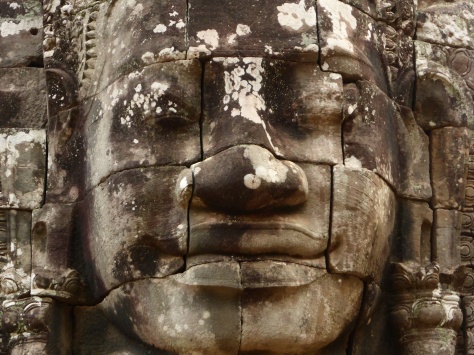 Not to be outdone, the Bayon has its own bas-reliefs adorning the walls…

…but many are unfinished and in poor condition, so I’d suggest swerving these and spending your time seeking out the faces and taking a moment to admire how the light dances upon the stone. 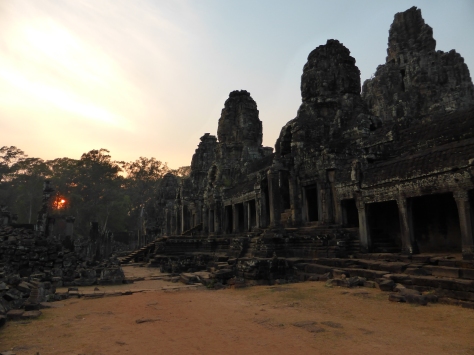 Next up the following morning is Banteay Srei, the veritable poster boy of Angkor Wat itself. Or perhaps we should we say poster girl given that it translates as ‘Citadel of women’, its intricate and detailed carvings in the fine-grained rose-pink sandstone lending themselves to the legend that it was built by women.

This is the temple that adorns $2 dollar t-shirts the country over, and it’s understandable. Even if you’d spent a full week shuffling around temples in the excruciating heat, I defy your heart not to soften on sight of this charming beauty. 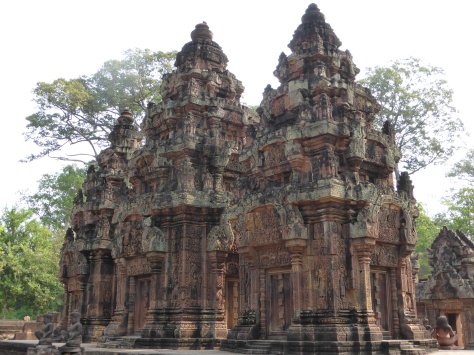 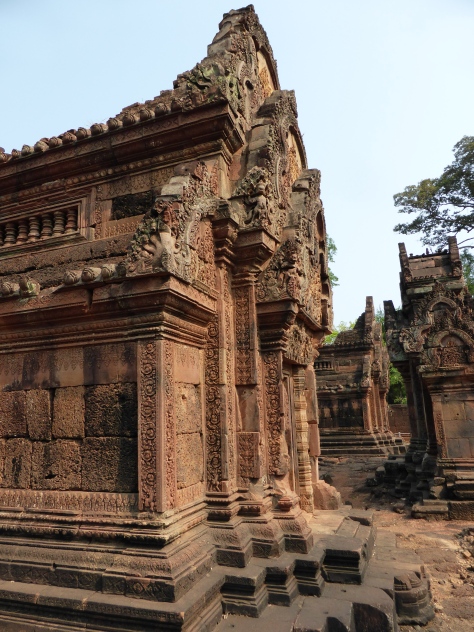 This temple is the Kylie of Angkor Wat, positively diminutive compared to some of its contemporaries comprised as it is of one single level. It is richly embellished with floral motifs and scenes from the Ramayana, considered one of the great Hindu epics. The temple itself was originally dedicated to the Hindu god Shiva in 967.

It’s a popular spot despite the 25km schlep from the main drag of Angkor Wat, so it is not conducive to linger here and the flow of visitors kind of carries you aloft towards the western exit. A local band of musicians raising money to support those affected by land mines plays us out with a beautiful soundtrack. 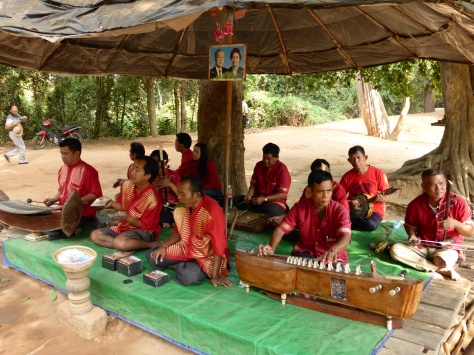 It’s worth stealing one last glance over your shoulder at the resplendent temple before the off. 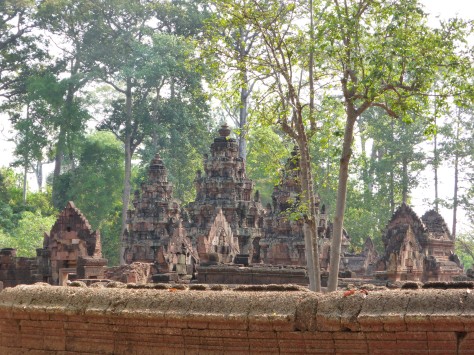 Our penultimate stop is Ta Prohm, made famous by a lycra-clad Angelina Jolie in Tomb Raider. It was built in 1186 as a monastery dedicated to the deity Prajnaparamita. Over time, nature has battled with it and in this case, won. Enormous kapok trees wind their way over, above and through the terraces and walls. 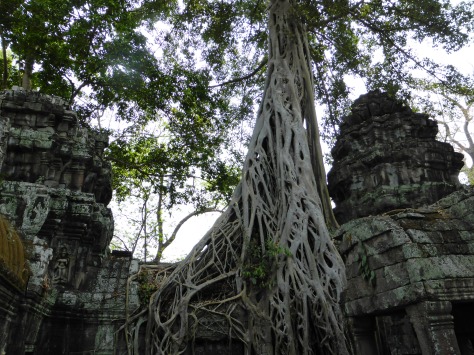 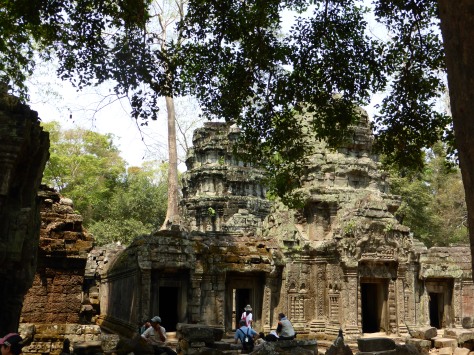 Wandering around it feels like walking down London’s Oxford Street though, it’s overcrowded and mostly shrouded in scaffolding. We make a very sharp exit and head for Preah Khan.

Here, we find something unique to Angkor Wat…peace. It starts at the processional way entering the western gate. 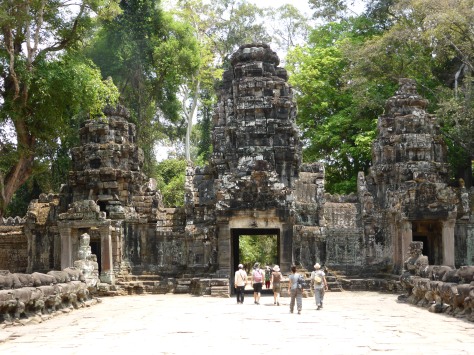 Preah Khan was built by Jayavarman VII on the site of a former royal city, and it was here that the king lived whilst he was overseeing the restoration of Angkor Thom. The name Preah Khan means ‘sacred sword’ is said to be a weapon that was ceremonially gifted by the king to his heir, so the person holding the sword hold’s the throne.

Soon I’m clambering through the halls and corridors of the temple which once served as both a monastery and university. Nature has also had its way here and lichen encrusts the sandstone giving it a very ethereal feel here.

The walls are graced with yet more eye-catching carvings. 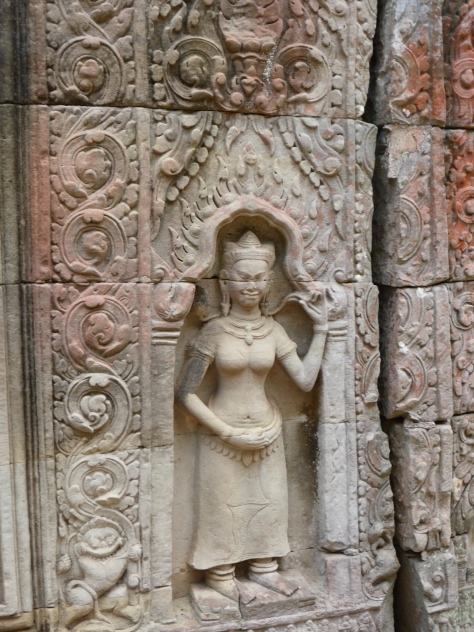 Taking respite from the sun, I grab a seat on the stairs facing one of the library buildings.

Right at this point I feel a calmness descend over me. The beauty of the temples hit me over the head from the moment the sun rose over Angkor Wat on the first day but it’s not until now, away from the bartering Lady Gagas and 007’s, that the serenity takes hold.

Maybe it’s the yoga, maybe it’s the full moon, maybe I just utterly love being back on the road again. But a switch flicks today for sure.

It seems like the right thing to do to pay my thankful respects at the stupa of Buddha on the way out.

Our tuk tuk driver looks as knackered as us by the time we’re ready to traipse home. 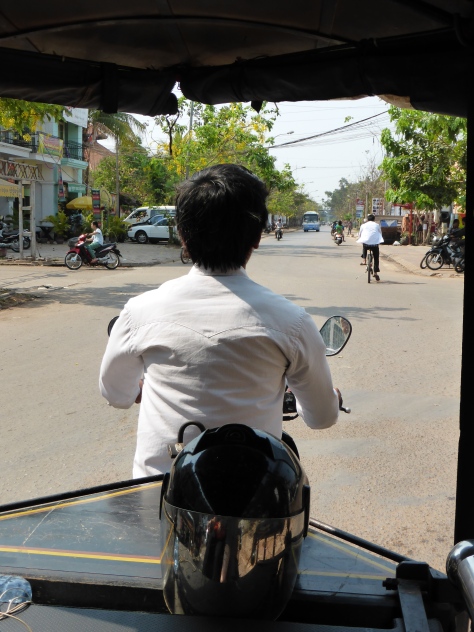 Sharon Van Etten ‘Are we there’

Daughter ‘If you leave’