Having hungrily hoovered up the highlights of the golden triangle and holy Varanasi we head south, like a flock of migrating birds, away from north India’s unexpected cold snap towards Kerala’s sprawling port city of Kochi. The wall of heat that hits us when we land is most welcome, and I will admit to feeling smug as I finally slip into flip flops with months of time in India stretched out in front of me.

The city is a real masala of influences, from the gigantic mechanical fishing nets bestowed by China, the colourful Portuguese churches to the deteriorating British Raj architecture. And it’s not just the temperature that we feel changing, there is a real change of pace here too.

The frenetic transport hub of Ernakulem is straight forward enough, but it’s the intriguing villages of Fort Cochin and Mattancherry where this mix bubbles up and thus it’s the biggest attraction for travellers.

We’re staying across the water in Bolgatty Island and arrive by boat into the main port of Fort Cochin for our first glimpse of the Chinese fishing nets which punctuate the curved bay. Watching the cantilevered nets being dropped and raised in line with the tide is a right of passage here, it’s all hands on deck when the time comes.

From here, we amble through Fort Cochin’s sleepy streets which are a collage of handicraft stores, bookshops and cafés. St. Francis Church stands at the end of the strip. It’s thought to be India’s oldest European built church dating back to 1503. 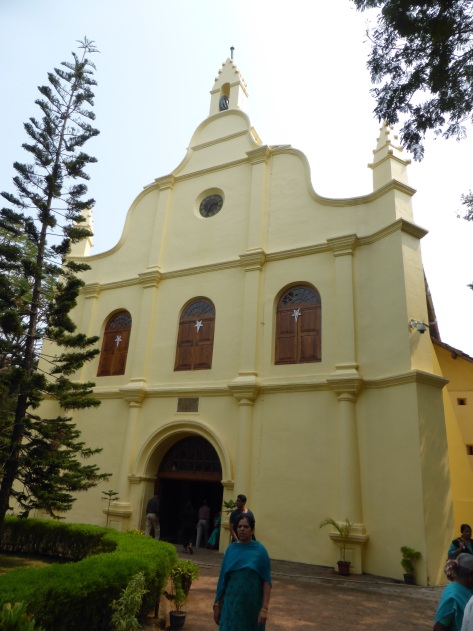 Portuguese explorer Vasco de Gama died in the city in 1524 and he was originally buried here until his remains were sent back to Portugal. His tomb still lies signposted in a macabre ‘here’s what you could have won’ kind of way.

Doubling back on ourselves, we round the northern peninsula through a colourful little trinket bazaar specialising in paper lanterns. 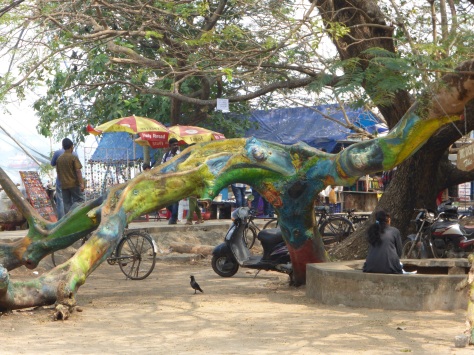 As we walk towards Matancherry, things start to get a little more interesting. The streets narrow, and the walls are no longer blank canvases as street art meets our eye on each twist and turn we take. 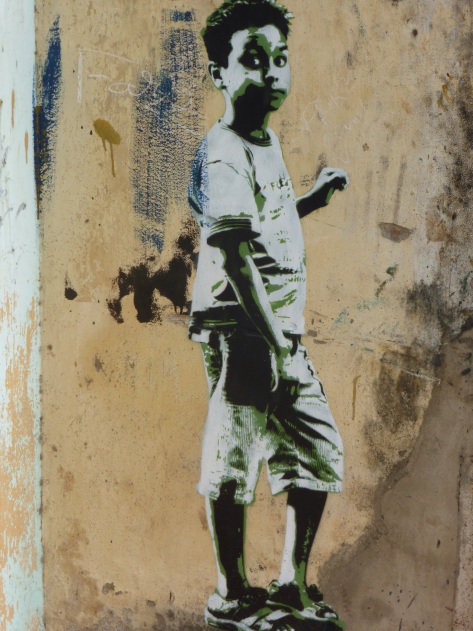 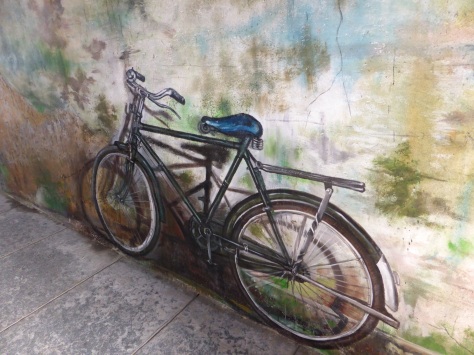 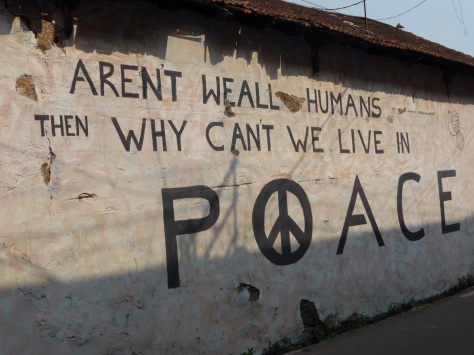 Unabashed by the narrow streets, industry ploughs on around us, together with the symphony of car and tuk tuk horns forming the street opera we’ve grown to love, or at least accept, in India. 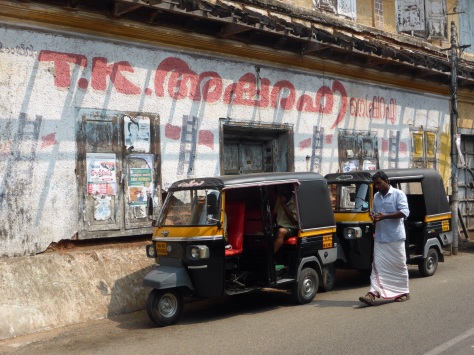 When it’s time to refuel, suave new restaurant 51 ticks a lot of boxes with vistas across the ocean and contemporary distressed steel inside. 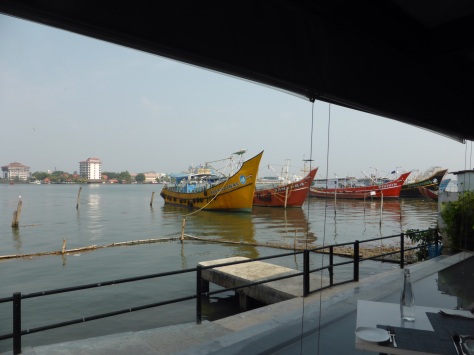 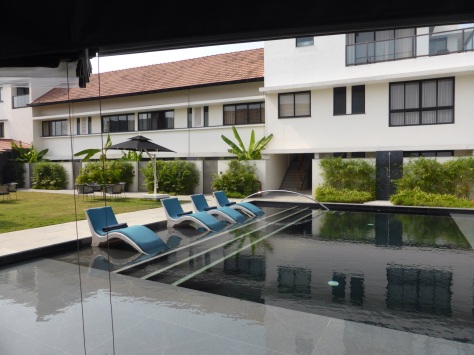 It’s more contemporary middle eastern and Mexican than it is Indian, but the food is exquisitely seasoned and beautifully presented.

We soak up the last of the sun ambling back to the port through the colourful streets. 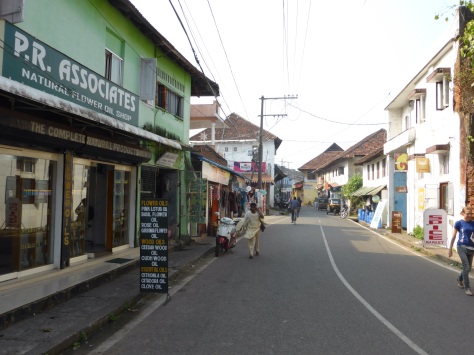 Back at the hotel a tantalising signpost greets us. After a long day walking in the serious sun, it doesn’t take long to make our decision. 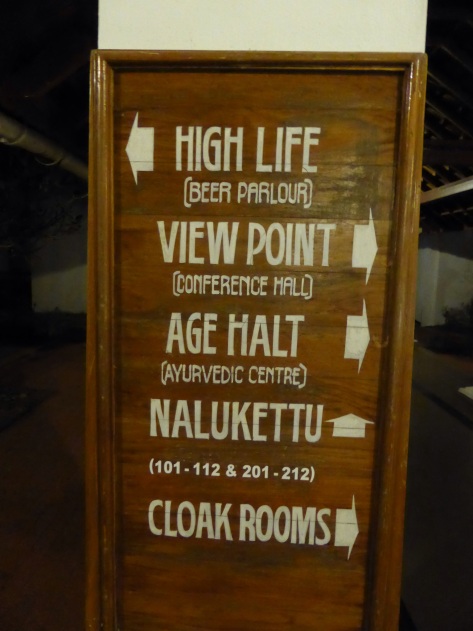 Naturally we turned left. And after one too many (or one too few depending on which way you look at it) ran into this Kathakali dance artist who had just finished a performance of the Keralan traditional classical dance. This is not a face we will forget in a hurry.

The next day, with dreams of sand between our toes, we board a four-hour train south to the backpacker hangout of Varkala, set precariously on steep cliffs overlooking sandy beaches that gaze out at the Arabian Sea.

This is where Jess, Laura and I will spend our final few days together before they hightail it back to London and I let the breeze steer me through the rest of India. And what a way to go.

Many who’ve gone before warned me that they ended up staying way longer than planned here in Varkala…which is exactly what happened to me. In my defence, just look at the place. 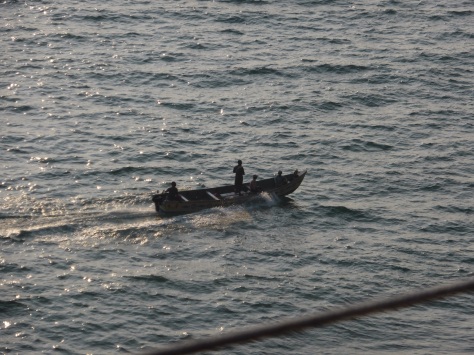 It is principally a temple town flanked by the busy little strips of North Cliff and South Cliff (Heathcliff?) and we settle into Soul & Surf on the latter and are quickly sucked into the Varkala vortex. Here, in the pristinely painted and comfortable well-finished rooms, the focus is on yoga, pranayama and massage for the soul, and the frothy swell of the Arabian Sea currents for the surf. They get the balance just right and it’s a fantastic place to spend some time. 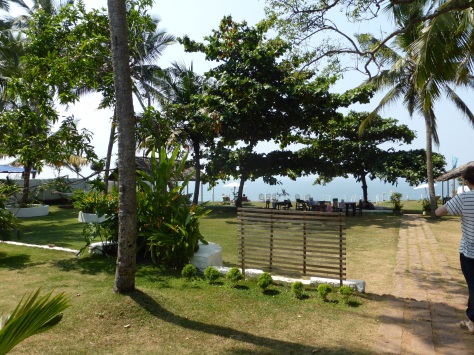 Our days are bookended with dawn yoga in the gardens,

and evening yoga and pranayama on the rooftop yoga hall…

In between times, if we’re not reading in a hammock,

then we’re larking about (or asleep) on the beach.

Despite this hectic schedule, we valiantly manage to s.queeze in some massages and Ayurveda treatments.

Those of you who have holidayed with me will know that Primal Scream’s ‘Screamadelica’ album is my absolute favourite to listen too on a beach. I discovered in Varkala that Beck’s ‘Morning Phase’ is an incredibly close second.

In the evenings both South and North Cliff keep us amused. Being a temple town, getting an alcohol license isn’t possible, but the various bars and restaurants along the strip flaunt this wildly by serving beer wrapped in newspaper and poured into mugs under the table. Not that we’re complaining. 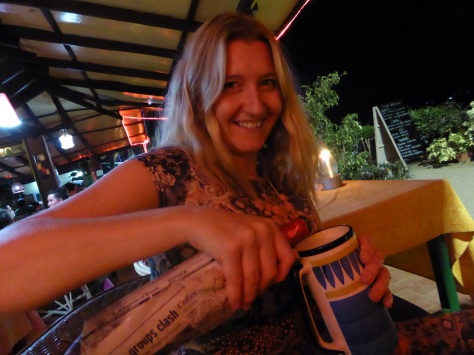 Nor are the police. Each time they catch a restaurant in the act, a tasty little baksheesh goes into their back pocket. Standard.

They even advertise the cocktails on their drinks list with secret ingredients; Gimlets with ‘G Juice’ and Piña Coladas with ‘R Juice.’ Stealthy.

When it is time to say goodbye to these two beauties… 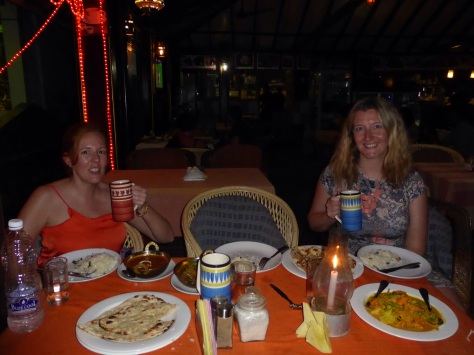 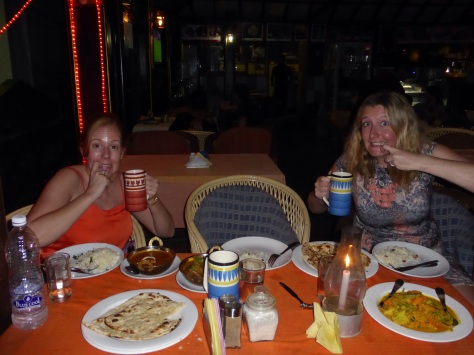 ..the unenviable task of entertaining me falls to Ben, Abi and Steve and a sterling job they do too. As luck would have it, they all live in North London too and I’m already looking forward to the reunion dinner at Rasa in Stokey.

Sooner than I’d like it is time to say goodbye to this view.

…but hello to this one!

The next stop is the quintessential Kerala experience, a leisurely cruise along the backwaters setting sail from bustling travel hub Alleppey (also known as Alappuzha) in a wee bread basket of a boat. 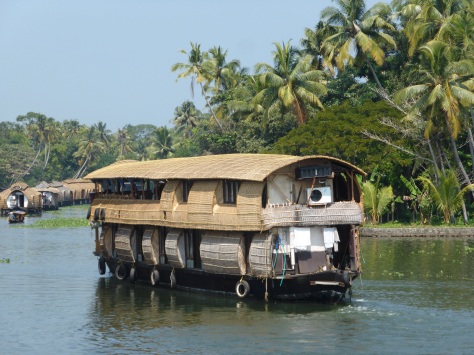 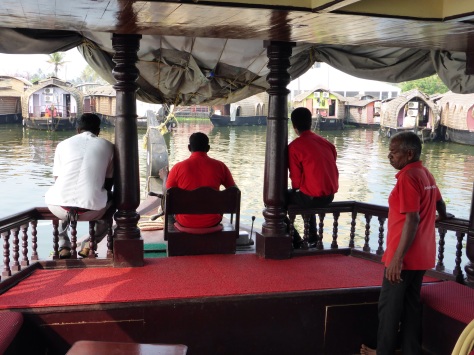 These fine fellows steer us through some of the most stunning scenery I have ever seen. Palm-fringed waters lead onto a patchwork of rice paddy fields as far as the eye can see.

Meanwhile, vibrant and colourful village life carries on around us for those who live by the water’s edge, for whom the river is their playground, their laundry, their bathroom and their fortune. 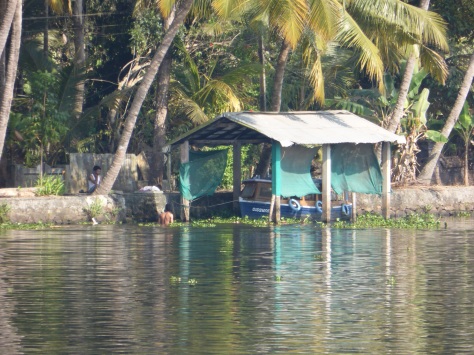 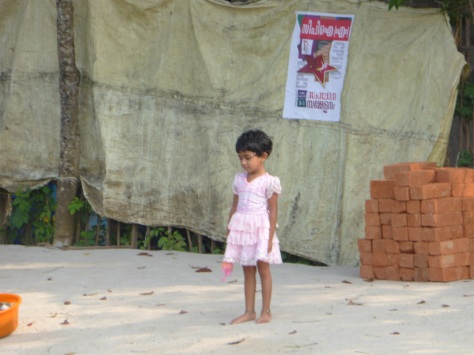 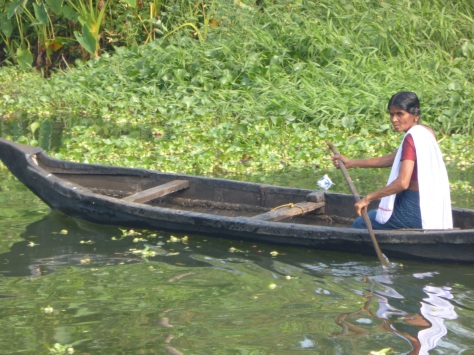 We anchor up for the night to watch the sun drop into the paddy fields behind us. 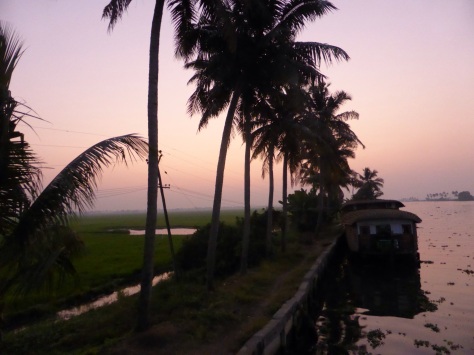 Then we turn our attention to preparing the catch of the day; tiger prawns and tilapia. 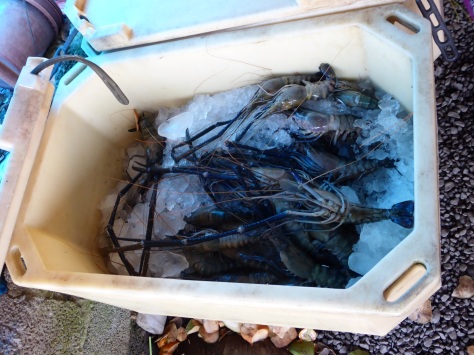 This gorgeous little sailing trip marks the end of my time in South by South West Kerala. In the morning, it’s all uphill as I’m bound for the first tea station of this trip in India. More from Munnar once the kettle has boiled…