From the sublime…to the ridiculous. Enter Las Vegas!

But of course, what happens in Vegas stays in Vegas right? Wrong.

At this point, Buffie, one of my best and oldest friends (in that I went to school with her, not that she’s like 70 years old) swoops in to join me from London. We’re also reunited with lovely Kim who, if you’ve been paying attention, you may remember from Peruvian, Panamanian and Guatemalan chapters.

The Venetian Hotel on Las Vegas Boulevard kindly agrees to take us in for a few days.

It is incredulously grand, and embraces Venice throughout.

But, above all, what it is famous for is not the faux St. Mark’s Square, the painted ceilings a la Sistine Chapel…but the bloody great indoor gondola lake on the second floor. 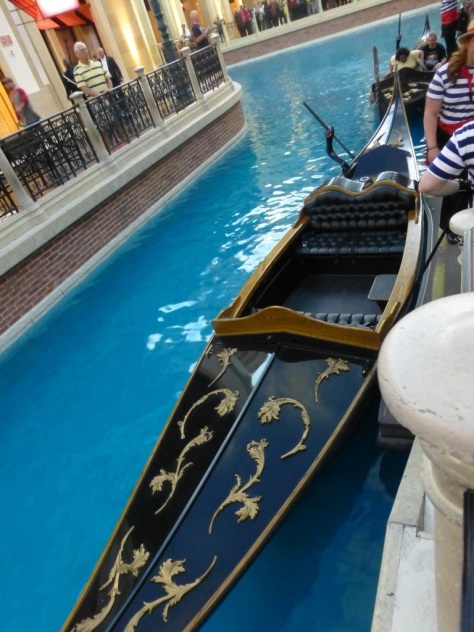 Did we take a ride? Course we did, when in Rome…oh wait.

First, they put a seatbelt on you. Yes, a seatbelt.

Then, if you are Buffie, Kim and I…you wave madly at passing tourists as though you are at Disneyland.

…this lady starts to sing the Cornetto song to you. 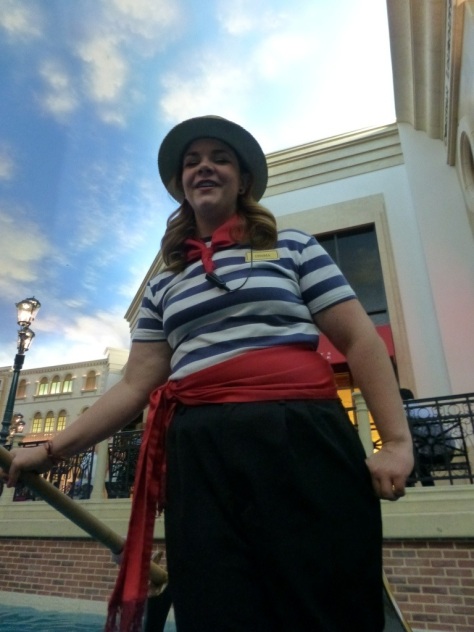 We head out on our merry way to see the rest of the strip. From the wildlife inside Bellagio’s…

…to the model Eiffel Tower in Paris…

…to the Greek giganta-statues at Caesar’s Palace…

…to the miniature brownstones in New York New York. A hotel so bamboozling, we even expected the full moon to be a faux Vegas moon, wheeled in entirely for our enjoyment. 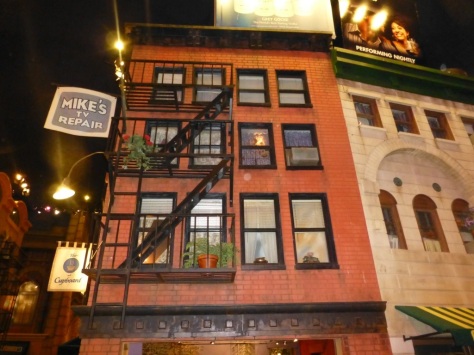 Once our brains have started to compute the mayhem that is Vegas, we settle for a margarita and a ringside seat at the Bellagio fountains.

The half hourly performance synced to music is certainly a stunning sight…but I catch myself momentarily in middle age by wondering about the water rates and shuddering at the thought of the wastage.

Perhaps some shopping will take our minds off that. Of course, the God of Finance is just begging for us to be separated from our hard earned cash in Vegas. Every designer name under the unforgiving desert sun has an emporium on the strip. My favourite shop on the planet, irrespective of city, Tiffany & Co even allow us to try on a bunch of jewellery that we can quite clearly not afford.

Us: ” How much is that ring?”
Rather game vendor: ” Why Madam, that is $2.6 million”
Us: “Excellent, remove it from its glass barricade if you will good man” 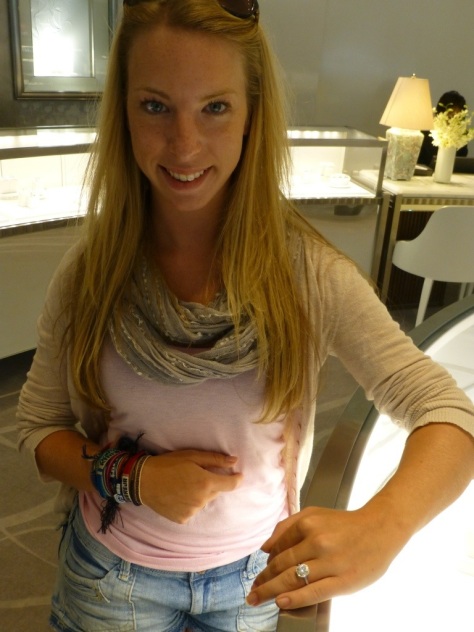 It seems that all reality is suspended in Vegas, and we rather enjoy it.

But, there is another little known pastime in Vegas. 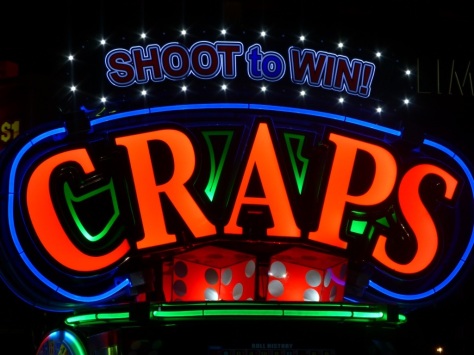 It’s time people, time to buy some chips, but not in a ‘n’ cheese way. Buffie and I head down to Bellagio’s to put our money where our mouths are. Or in this case eyes… 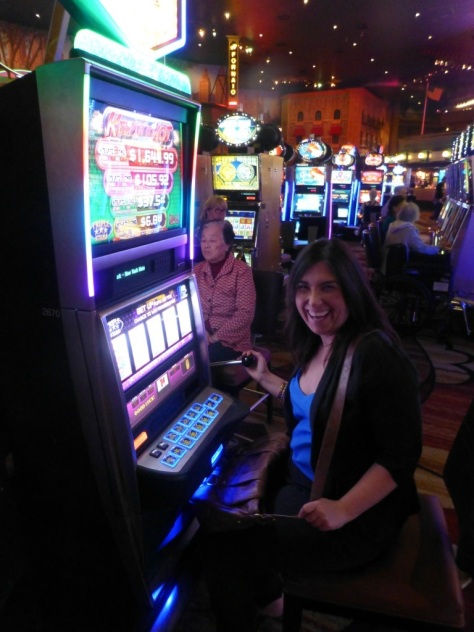 From the fruit machines (lovingly referred to as Puggies in Glasvegas), we head on over to the Roulette table which is about the only casino table I understand. For once, the house is on my side and I come away $175 up. Let’s not discuss how much I was down to get back to this point however…

Finally, I learn when to call it a day and watch Buffie playing Blackjack like a badass. Eventually she stops using words, and expresses her wishes for cards (or otherwise) only through tapping the table and/or the Jedi mind trick. It’s thrilling to watch.

Unfortunately for Buffie, she runs out of chips, so the only useful assistance I can give at this point is to keep handing her mine. Her Dad, a fan of gambling all his life, would have been immensely proud of her. I am a bit too, she’s hardcore. Casinos just don’t scare her the way they scare me.

How else to celebrate than with dinner, on top of the world! Well handily, that’s the name of the restaurant.

Located at the North end of the strip, the Top Of The World restaurant sits atop the Stratosphere Tower. At 350 metres up, it is the highest building in Vegas and offers dizzying views as you slowly rotate.

It even has a roller coaster on the top of it. Of course it does 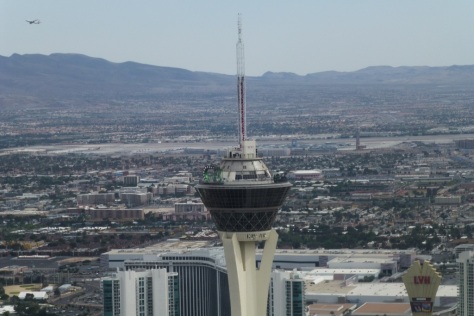 By night, your view across the city has a strange side order… 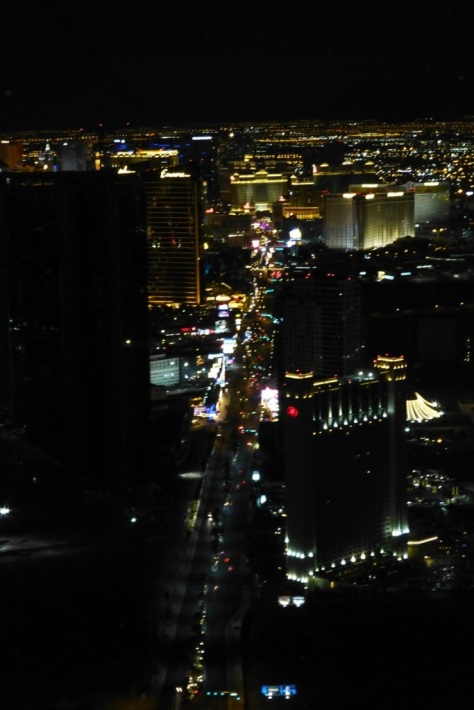 Skyjumpers, braver comrades than I, leap to certain death OR absolute safety every few minutes as we eat.

We are then honoured with a tour of Kim’s Forest Gump-themed penthouse at Planet Hollywood. Yes, Penthouse. 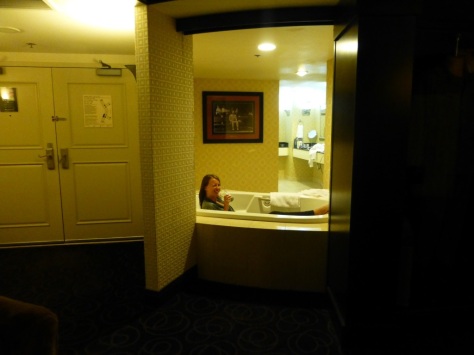 It knocks our televisions at The Venetian, the size of my living room, into a cocked hat.

The next day, we blow the cobwebs away by climbing first into limousines…

…then into a helicopter…

…for a tour of the Grand Canyon then a flight over the strip. Our pilot Mike is a real card. He has tailored his soundtrack accordingly. See below.

Then, as tension starts to build and we swoop above the Grand Canyon…

It is a stunning flight over Hoover Dam

and across the Grand Canyon.

We finally land in the blimmin’ canyon and have a champagne picnic with our Australian chopper-mates.

Then it is back over Lake Mead, and across the strip en route home. 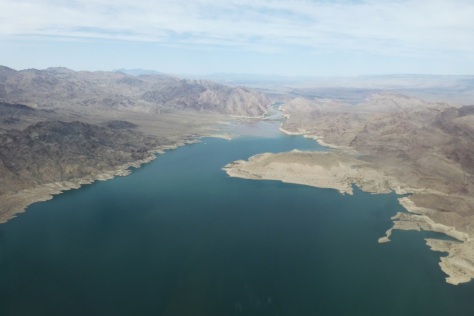 Captain Mike, we salute you.

With astonishing speed, our time in Vegas is coming to an end. A fitting final show is watching the fountains do their thing to the tune of Star Spangled Banner. So Vegas it hurts. 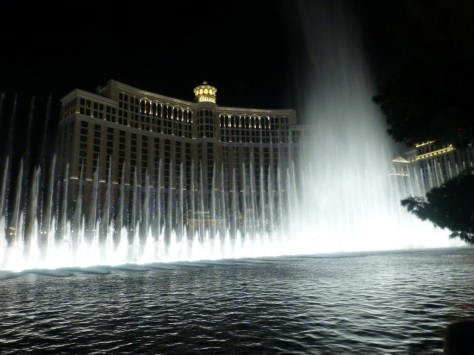 And with that, it is road trip time. We pick up our motor.

We pick up our motor…

…which for unknown, but entirely editorially comical reasons, has New Mexico plates.