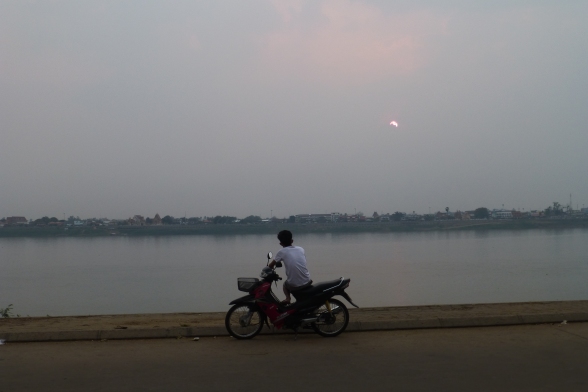 After another hugely entertaining bus journey, this time from Phonsavan (via Paksan) to Tha Khaek a burgeoning town on the east bank of the Mekong river. Its literal translation is ‘guest landing’, thought to be a nod to its original role as a stopping point on the river for foreign traders passing through with their wares.

There are multiple selling points for this stunning beautiful central region of Laos, but it is also fair to say that there are two lead reasons that time-poor backpackers swing their rucksacks through this town. The first is to merrily motorcycle ‘The Loop’, a three day off road experience round a circuit of the more remote parts of Khammuan and Bolikhamsai provinces. The second is to spend a day’s merry motorboating through Tham Kong Lo, a 7km long cave through a limestone mountain in the nearby Phu Hin Bun national park.

Unfortunately, I am one of those time-poor backpackers so it is Tham Kong Lo that draws me here to Tha Khaek. As we exit the bus, there are quite a few of us headed towards the most popular budget choice in the area, a hostel called The Travel Lodge. Our game driver packs up the heavily laden tuk tuk, and deposits us (two Swiss, two Americans, one English and the standard solus Scot) at the hostel.

The Travel Lodge is to Laos hostels what, well, Travelodge is to UK hotels…basic, wildly overpriced for its standards and vaguely uncomfortable. Thankfully for me, nobody has a booking…and I watch politely as everyone else checks in to the available rooms. By the time myself and travel buddy Jackie get to the front…there is only one room in the Lodge rather than the hostel, which is finished to a significantly higher standard, ant free and positioned round a little courtyard about 100 metres along the pathway. It is still only 12 pounds like…but it feels like walking into Malmaison. Result. Having been poorly for a day or so back in Phonsavan, this is the (relative) luxury I have been craving.

The next day, after a momentous sleep, we wave our compadres off on their dollar-a-day rented motorbikes to do ‘The Loop’, equipped with minimal safety features and maximal smiles. I’ll admit to a sharp pang of jealousy and a subsequent internal vow to return one day with ‘The Loop’ in my sights.

For now, it’s time to explore the small, sleepily relaxed town. Franco-Chinese architecture and tall trees line the streets all the way to the riverside, its natural centre, which is a pleasant 1.5km walk from the hostel. 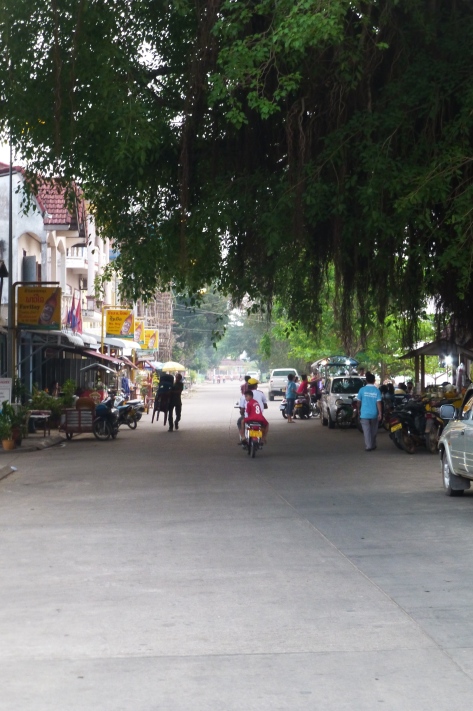 Again, the sun here disappears into the haze before it hits the horizon. Yet it is still a sight beautiful enough to stop the locals in their tracks.

We bump into two travel pals from the bus, Spanish Berna and French Audrey who teach English in Beijing, and settle into Inthira for a beef and cashew stir fry with sticky rice. We tried for a sundowner by the river, but approximately 6,000 large river flies had the same idea so we escaped inland.

It is here where our story saddens. Fans of Same Small World (both of you) will know that I’ve never had the greatest luck with cameras whilst travelling. My blog post from the stunning Galapagos Islands was cut short by the introduction of an impertinent wave to my unsuspecting camera. This time, here in Laos, the unfortunate meeting was between a large pothole in a Tha Khaek road and the wheel of the tuk tuk ferrying us home. It set off a chain of events including my open bag being airborne for less than a second, choosing to execute a mid-air spin and landing indelicately, contents first, on the floor of the tuk tuk.

The camera doesn’t make it through the night, and I contemplate the onerous thought of a dearth of beautiful images to reflect on after this trip.

The next day, Jackie and I head out to Tham Kong Lo with Brit brothers Sam and Harry and students Shoya and Maren from Japan and Germany respectively. Lucky for me, Maren is something of a photography whizz and kindly offers to share her shots with me. So you can thank her for the following contributions.

Having spent many an hour staring out the window at the Laos scenery, the sights which await us en route to the cave are the standard to which we’ve become accustomed. Gothic mountains darkly preside over verdant landscapes below. But when we reach the monolithic mountain that hides the cave itself, a beauty not yet seen starts to reveal itself.

We’re kitted out with headlamps and wisely relieved of electronic devices, then we meander through the rock paths to the mouth of the cave. 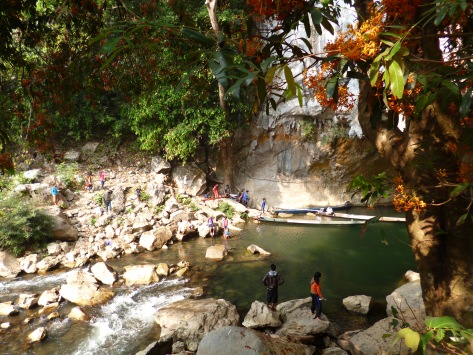 With boatmen at the top and tail of out motorised longboats, we set off into the cave which is 7km long and up to 100 metres at its widest point. Its a natural wonder which meanders nonchalantly through the karst limestone mountain, its vastness revealing glittering stalagmites and veiny walls. 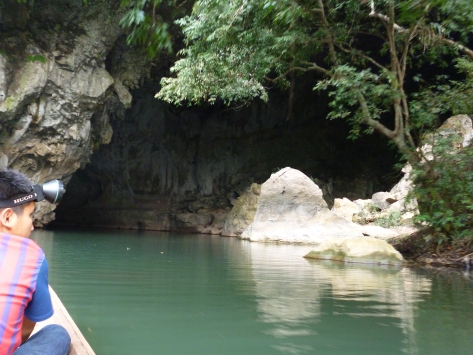 There are several lighting projects within the cave, mostly funded by New Zealand according to the signage. But much of it naturally attacks the senses, low lighting adding to the majesty and curved stonework which sonically turns our engine into a chopper at fleeting points.

We alight at various points for further investigation or to outfox the water, especially at the effusive Muang Houng rapids. Slowly, we start to emerge into the sun. 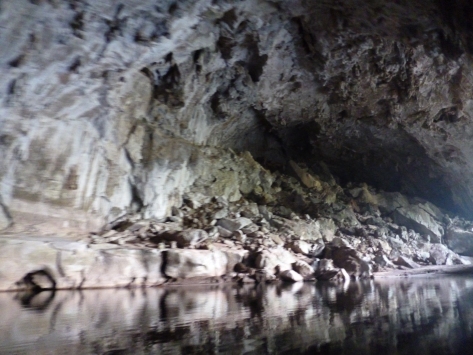 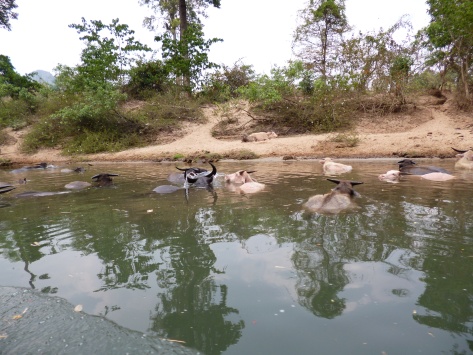 There is time for a swift Beerlao on the riverbank before we volte-face and take the return leg of the 90 minute journey.

We all cool down with a dip in the clear pool at the base of the cliff, before snoozing all the way home.

Starved after all of the excitement, we pile out to the riverside and spot a nameless but bustling Thai restaurant just around the corner from Inthira. It is utterly ace, take a left exiting Inthira then the first left and it is four doors up. Green curry, sticky rice and Beerlao cap off a very respectable day of misadventuring.

Here in Tha Khaek, it’s time to bid Jackie farewell as she travels onwards to Vietnam and I catch another bus to Pakse then (four hour) tuk tuk to Ban Nakasang on the banks of the Mekong. Here nestles Si Phan Don (Four Thousand Islands) just a hop, skip and a jump from the Cambodian border.

It’s a long and laborious journey on a dusty road. When we arrive at the shanty port town under cover of darkness, it is closed and there are no scheduled boats. Of course, everything in Laos is available for a price. Before long the tuk tuk driver is hollering through the window of a house calling out a boatman to take us the twenty minute scoot across to Don Det. We glide noiselessly across the Mekong under the pale moon light – it was a pretty special way to arrive. Before long I’m checked into Little Eden on the Northern tip of the island and sound asleep having suffered my last bus journey on this side of the border.

Whilst there is much to explore in and around the islands, two of the favoured pastimes by backpackers here are floating down the Mekong in a rubber ring and enjoying pizzas and milkshakes with ‘happy’ added as a precursor. Contrary to popular belief, this is not because Pharrell Williams wrote his critically acclaimed chart-topping and mind-numbing hit here, but instead denotes the addition of cannabis. Many backpackers do these activities together, creating the kind of sunburn that only an utter imbecile would inflict on themselves.

The unfortunate by-product of this, is that there ain’t much authentic about this paradise. You’ll be lucky to find a word written in Laos or a two yard walk where you won’t be touted at. It becomes abundantly clear that one man runs almost every business on the island, from bike rental to stoner cinema and everything in between.

Cannabis has never been my drug (I’m much more of an Ayahuasca girl…) But thankfully, there is plenty to see if you hire a bike for the day from Mr Mo’s and head on over to neighbouring Don Khon. Cycle down Sunrise Street (one of two only roads, both pedestrian, the other predictably named Sunset Street) until you hit the bridge on the left, for which you’ll need to pay for crossing but the fee includes entry to the Khon Phapheng waterfalls to the south of Don Khon.

After a hot hour-long cycle down a road named Rocky Shadeless Road (I jest ye not) you loop round to the falls which are just about the most aggressive I have ever seen. I take shelter in the wooden mushroom huts set out over the water, called the Oasis, and read to the thunderous beat of the water before cycling back to base. The views have been really wondrous, but I can take or leave the ‘spring break’ vibe. I fall in with Lasse, a German backpacker, just about the only other voice of sanity on the island. Together we hit the culinary high notes of Don Det including the ridiculously tasty Pumpkin Burger at Mr B’s Sunset View (not to mention their stunning Lao Mojitos), and find ourselves to be ‘happy’ enough with the milkshakes.

Next stop Cambodia. Keep the faith readers, I will have photography by then…