The original plan for Belize had been to head inland after the Cayes to visit some of the wildlife reserves in the west before going south to catch a boat to Guatemala. But once I got into the swing of island life, I was loathe to leave the beaches and turquoise blue waters behind. So I decided to stick close to the coast as I headed south.

Nowhere has ‘Belize time’ felt quite as evident as when I arrive at Belize City bus station to catch a bus to Hopkins. There is no schedule, or indeed stop for the James Line service which connects to Hopkins via Dangriga. Upon enquiry, I’m told, “The bus is orange, you’ll see it when it gets here.” Right.

The buses are hysterical old bluebird buses that US schools used to use, all painted bright colours with reggae, chosen by the driver, pumping out of the speakers throughout. The conductors wear their caps, emblazoned with US basketball teams, back to front, their jeans low and their smiles wide. The passengers are rather entertaining too…

I land in Hopkins after a punishingly long wait for a connecting bus to find a small, pretty fishing village made up of two long dirt tracks. It’s a sleepy wee place with a strong Garifuna influence. Without the strong sea breeze as at the Cayes, and of course the air con, the heat is stifling

This is a one-hostel town, and the lack of competition is evident in the Funky Dodo hostel. It could be a cracking place with a few little touches here and there. But the owner keeps telling everyone how tired he is and how hard he works, so no request, large or small, is met! 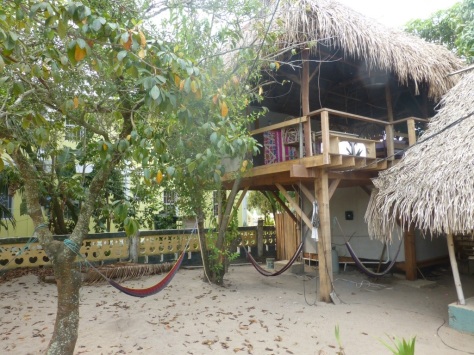 He’s arranged an all-you-can-eat BBQ for the following night which has tired the poor lamb right out. It is for about ten people mind, so I amuse myself at picturing how he’d get on running a busy press tent at a music festival or awards show! Then he imposes a voucher system on the BBQ whereby the food stops when you run out of vouchers. Small point Will, that is not all-you-can-eat mate. The clue is quite literally in the title…

My neighbours are the lovely, and recently engaged, Alice and Ollie who live in London. We decide to embrace the local culture by heading north to the music school for a lesson in Garifuna drumming. We meet Jabar, the teacher, and later Amol, his star pupil. Their version of a cockney accent leaves a lot to be desired, but their drumming is mind-bogglingly good.

We make our way through traditional Garifuna rhythms such as the paranda, punta and watina and it is flippin’ brilliant fun. Jabar and Amol add the lyrics, the icing on the cake, while we stick to the basic rhythms and we actually start to sound like a plausible band. Potential band names on a postcard please. Good to finally get some value from those drumming modules I laboured over at school.

We reward ourselves with dinner at Love On The Rocks where the seafood and catch of the day snapper fillets are served on hot rocks for you to cook to your tastes. 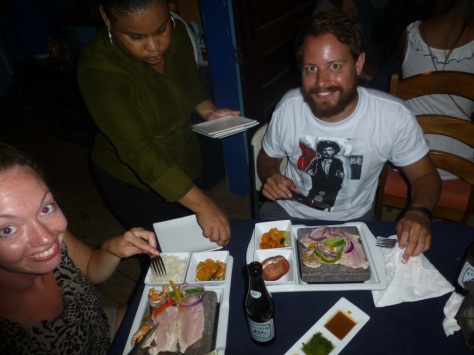 The next day, I’m looking for adventure…and find this little tour company. Handy… 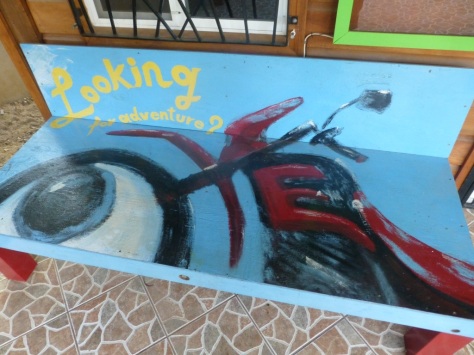 I sign up for a night tour of the nearby Sittee River, and simultaneously meet Emma who later that week offers me a job in Hopkins! I politely decline as I’m not sure how many bands make it here on their world tours…

So, as the sun sets I head out to the beautiful marina to hop in a boat with Captain Levi and head out on the river. As with most Central American towns and cities, the marina is a real demonstration of the ‘haves’ precariously placed next to extreme poverty of the ‘have-nots.’ The boats are absurd, and the accents are American.

We spot wildlife along the way, starting with iguanas and egrets as the sun sets, then crocodiles once night has fallen. 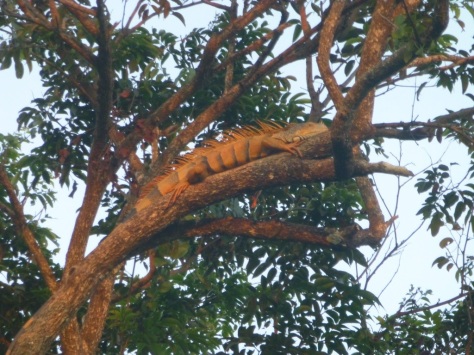 The flora and fauna is stunning too. One of the trees produces a banana-like pod which looks like this when it opens up to flower. 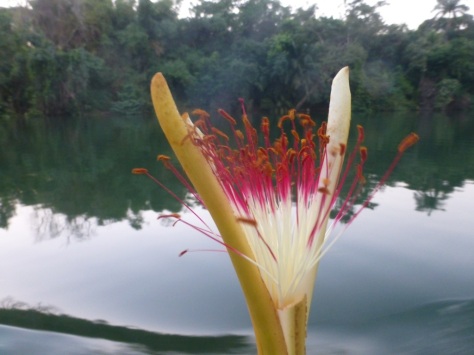 On a non-wildlife tip, I also find my most favourite name for a boat…like, ever. Presenting… ‘Nautical By Nature’ 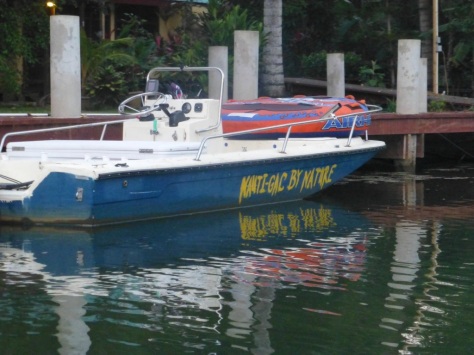 We snack on Malay apples along the way, taking our digestive system’s life into our own hands

At nightfall, aka croc o’clock, we get the flashlights out (sorry…TORCHES…I’m surrounded by Americans) and scan the riverbanks. Three pairs of eyes glint back at us, and as we get closer we see they’re up to 2 metres long. They’re shy though, and don’t hang around for long.

Captain Levi takes us to see a baby croc that he keeps as a pet at the water’s edge at the end of his garden. He gives us the chance to hold it, but he’ll have to tape it’s mouth up…not on my watch thanks.

We head back along the banks of the river toward the Anderson Lagoon.

Named after the Sailor who created this convenient water way, this is a lagoon where the salt water from the Caribbean meets the fresh water of the Sittee River. At certain times of the year I’m told, the algae that this creates glows phosphorescent. It is quite a sight to behold, each time you disturb the water’s surface, you create a glow. Fish darting round inadvertently create tracer-like wakes behind them and you can virtually sign your name with your finger. It’s one of the most amazing things I have ever seem, and it is impossible not to trail your fingers through the water as we cruise back to the marina.

There is time left for a little light hammock-lounging (well it’d be rude not to) and to capitalise on Belize’s first language by catching up with the newspapers. 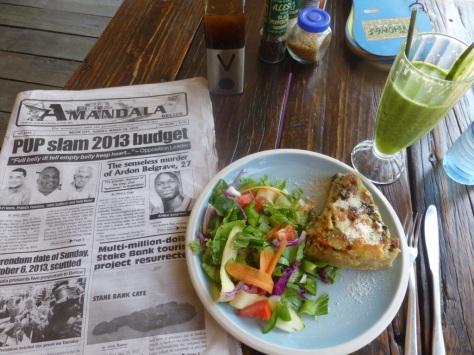 Then it is onwards to Placencia, a little over two hours down the coast. It is famed for being the only Caye you can drive to, as it has beautiful beaches but finds itself at the end of a peninsula giving it an island feel. It is less authentic than Hopkins, but the beach is beautiful so it’s worth a stop. In the town, everything is connected by a network of boardwalks…

…taking you on a tour of the town’s excellent restaurants. So, as has become the true rhythm of Belizean life, I spend my time either lounging on the beach reading this (yes people, this is finally happening!) 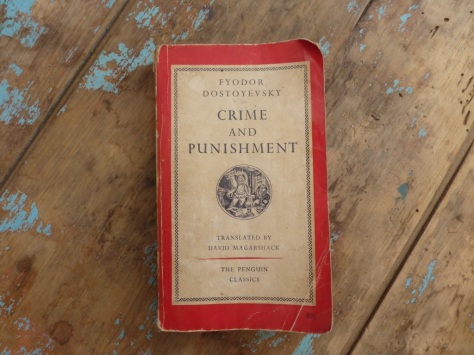 or eating. Highlights include the snapper with banana and rum at Rumfish, and my first taste of Lion fish at Omar’s

But the Belizean chapter ends here. It is time to rid myself of the inertia that has creeped unwittingly into daily life, and get back out on the road to discovery. Next stop Guatemala…by boat!

We hop over the lagoon to Independence

…skip down to Punta Gorda by bluebird bus, then jump onto a boat bound for Guatemalan town of Livingston.

Woops, better put my camera away…this is immigration after all. Belize, you’ve been proppah like a snappah, aarait! Don’t worry, I’m scribbling you down on the ‘countries I’ll return to’ list as we speak. At the same time, I’m rebooting my Spanish speaking software! Adios Belize. Gud maanin Guatemala… 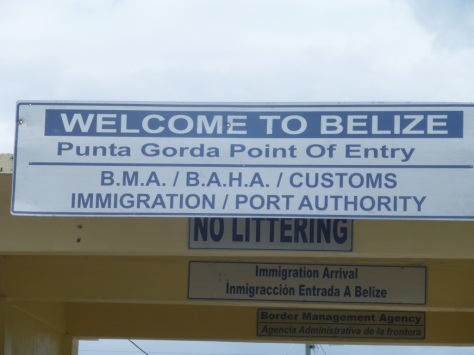