So, onward to Guatemala then. Fortunately I don’t have to rip myself from the Caribbean just yet as the first stop, Livingston (nicknamed Buga), is right on the coastline at the mouth of the Rio Dulce. It’s also Easter (Semana Santa in Spanish) which is kind of a bid deal in these parts and means two things…1) accommodation is booked out and 2) a whole lotta Jebus lovin’.

Due to the former, and the fact that I have neglected to forward plan due to rum consumption in Belize, the hostels are booked out. So I find myself in a charming little bungalow in Vecchia Toscana right on the beach. It’s a swell place to spend Easter… 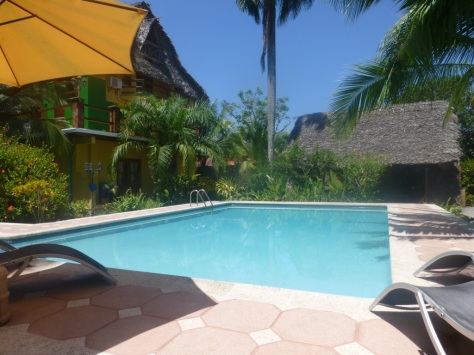 Livingston is, like much of Guatemala, set against the backdrop of stunning mountains and has a vibrant market too. 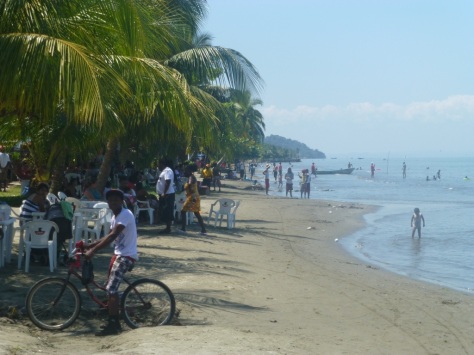 As far as outings go, the must-see go-sees are Siete Altares (Seven Altars) which is a network of waterfalls flowing from the higher ground into the sea. 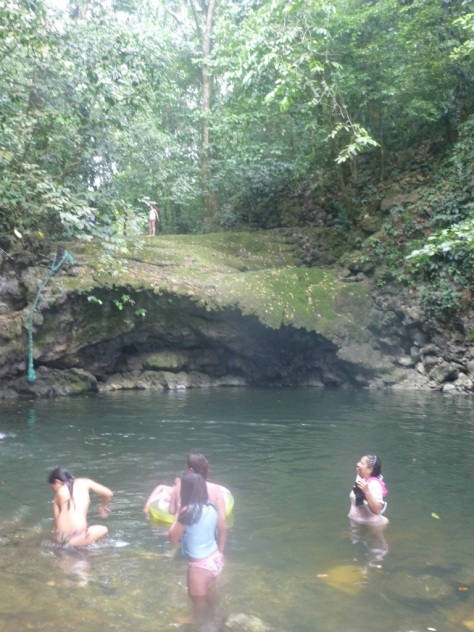 Note extreme absence of water actually falling…dry season innit. Of course they don’t tell you that before the half hour hike.

Playa Blanca offers the last beach I will see until Hawaii next month so I am keen to soak up as much sun as possible before moving inland. Coconuts with straws, coarse golden sand and shallow tepid waters. Thankfully, it is everything you would expect from a Caribbean beach. 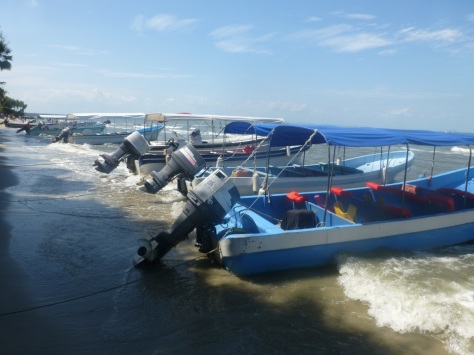 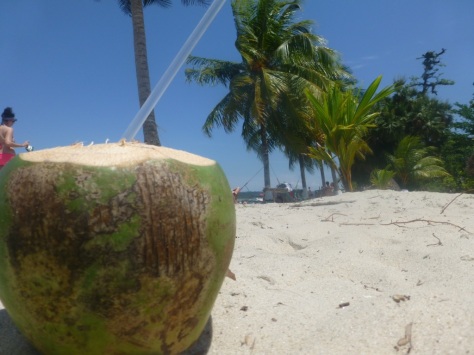 Chief amongst the highlights here though is the food. There is a strong Garifuna culture here, as with the coast of Belize and Honduras, and the local specialities reflect this.

First up I try Tapado which is a Garifuna seafood stew and is a traditional dish served like a soup on the Caribbean coast. It has everything from crab, shrimp, snapper, conch and even shark served up completely whole in a mildly spiced broth. It is delicious…but I didn’t expect the crabs to greet me quite as they did…

I want to immerse myself in the culinary culture here so I sign up for a Garifuna cooking class at Rasta Mesa (meaning Rasta Table), a cafe and cultural centre in the northern part of town. Roaming from hostel to hostel, I haven’t really cooked for myself since 2012…so I am keen to get the apron on and whip up a Garifuna storm in the kitchen. On the menu this evening? Plantain fritters with coconut rice and salsa. According to the Belizean born Rasmega and his American wife Amanda who own and run Rasta Mesa, this is what you would prepare for a special occasion like a family wedding or anniversary…it’s the luxury end of the Garifuna spectrum.

To kick things off, I crack open a coconut with a machete for the first time ever (oh the power) and proceed to excavate its flesh for the coconut rice. The utensils are a little more basic than I’d usually be used to. I am going straight to John Lewis when I get back to London to find one of these machines. Cookware klaxon! 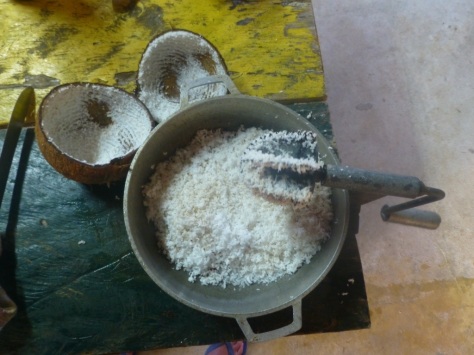 Then, just like Dinosaur Jr’s 1993 command, it’s time to ‘start choppin.’ We also grate the unripened plantains to make a paste. 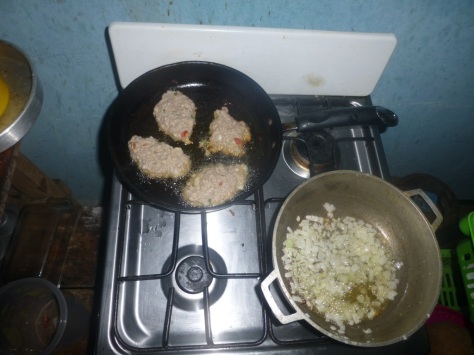 Before you know it, we’re quite literally cooking with gas, and it is not long before we serve up the goods and eat it with Rasmega and his family.

Semana Santa fully kicks in and a procession takes place on Good Friday through the town, decorated by these beautiful sand carpets depicting religious scenes and messages. The kids in the town spend the morning working hard in the unforgiving sun to make this happen.

The celebration is completed with a re-enactment of the crucifixon (of course), and drinking on a par with UK bank holidays.

I take my leave when the town starts to feel like Manchester the day after a Rangers UEFA Cup Final and head along the beautiful Rio Dulce to the town of the same name. The journey is well worth the two hour wait at the port as we snake through the slender and curvacious waterway dwarfed by rock formations either side.

One hour and a mild soaking later, we arrive at Rio Dulce town also known as Fronteras, a hangover from it being the last stop before the tricky northward road to Peten in the highlands. There is little to see in Rio Dulce town apart from the river itself, so I water taxi out to the Hotel Kangaroo, an Australian-run backpacker’s joint over the way from the bustling town. 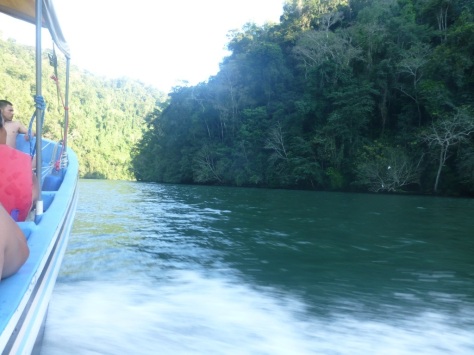 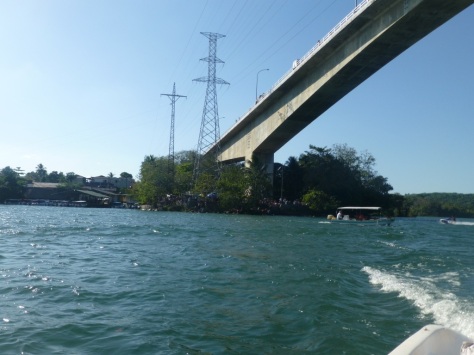 Here I get into a little bank holiday drinking to celebrate Cristo’s revival with a great bunch including Gabby and Sarah from England, Shahar from Israel and a Spaniard called Albert (certainly Scottish in a past life.) I’m not sure what the Spanish for honesty bar…but I do know that they had one…peligroso.

In and around the surrounds, en route to nearby town El Estor, there are a couple of well hidden haunts to visit. The route there includes taking a 15 quetzales collectivo, kind of like a clapped out mini-van that shuttles you onwards once full. They are usually hectic affairs, with a game conductor hanging out of the speeding vehicle shouting their destination as you reach top speed. To complete the hilariousness, the Guatemalans will stare at you the whole way, principally because they have never seen anyone (in their own words) as ‘long’ as you before.

If you survive that, you make it to Finca el Paraiso which is the world’s only naturally hot waterfall. It’s a stunning sight, busy with Guatemalan holidaymakers but splashing around in its pools is a lovely way to spend a morning.

Under the lip of the rock, the hot spring water creates a natural sauna to get your detox on post-Easter celebrations. 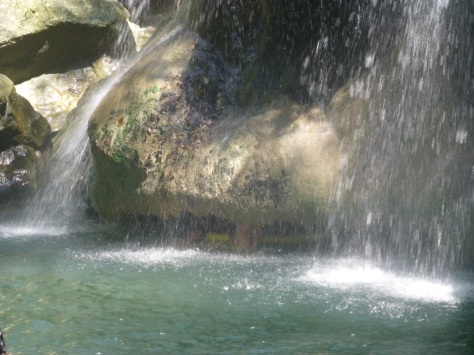 The visit is peppered with business-minded young Guatemelans swarming round you demanding that you buy their wares ‘Comprar cocos.’ 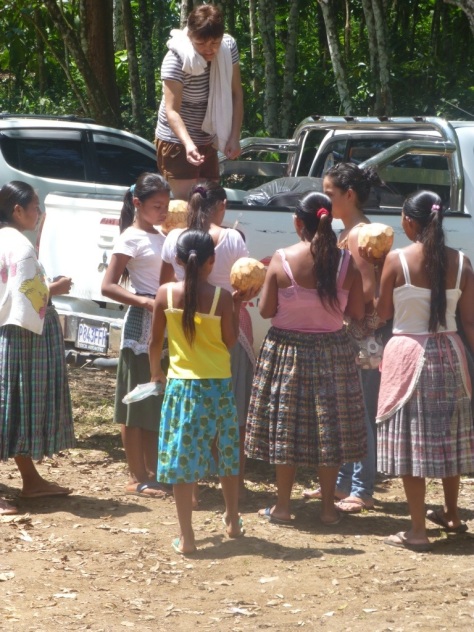 On the banks of the river, there is no Easter rest for the local women who wash their clothes in the tepid waters. 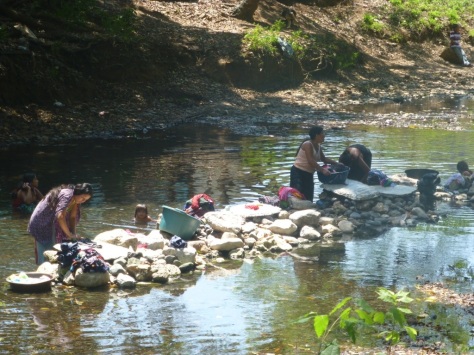 Ten minutes further along the road in a collectivo, unless of course Tourism Policeman Roberto gives you an escort in his van, you’ll find El Boqueron. Here, a couple of kids will take out for a trip along the water in their boy-powered lanchas to enjoy this stunning view that is straight out of a Rambo movie. 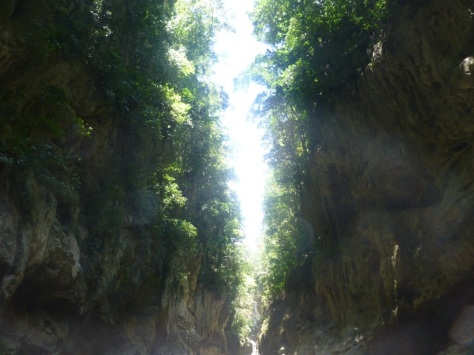 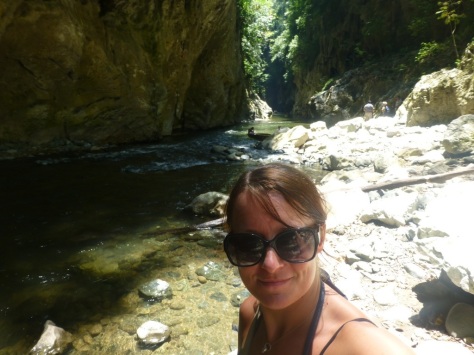 This is a very spiritual place for Mayans and it is here each year on the 21st December, the last day of the Mayan calendar, they perform Mayan rituals.

And the Mayan gods reward them with amusingly shaped rocks along the river. Looky look, a crocodile! 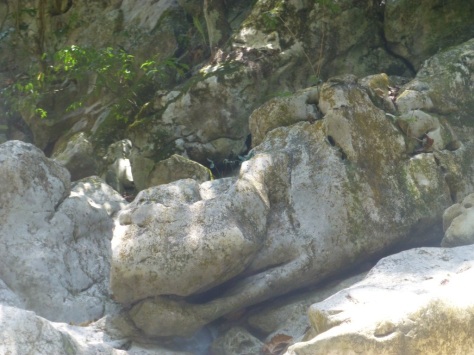 The 15 quetzales journey (approx £1.25) is big business for the kids around here. Some of the lanchas are full to the point of mild sinkage…

The north beckons eventually, and it is time to leave the colourful port of Rio Dulce after one last shrimp ceviche, a central and South American speciality, my last in the continent. 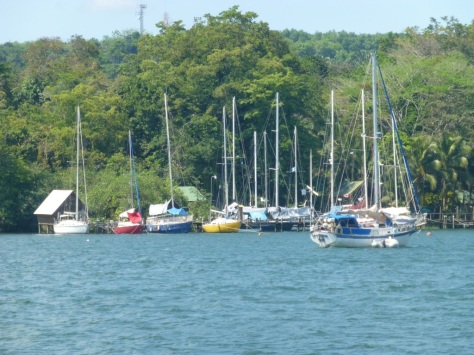 Again, due to extreme lounging, I have neglected to book the bus from Rio Dulce town to Flores. However, the driver let’s me sit in the aisle next to him for the hysterical four hour trip.

All recommendations had pointed to Los Amigos hostel in Flores, a beautiful little island in the middle of Lago Peten Itza. And I can see why. I settle into this little treehouse for a few nights.

The town is awfully bonny, with rocky flagstone roads and colourful buildings. 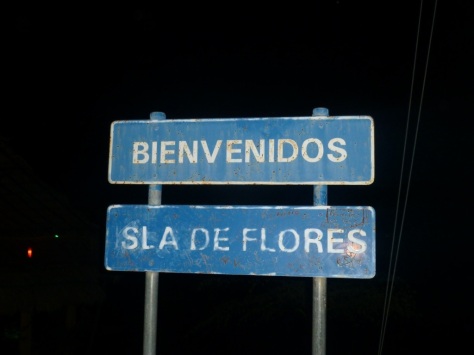 The key draw here in Flores is its proximity to Tikal, the Mayan ruins set deep within the nearby jungle. So, armed with Uruguayan Roberto, Irish Elaine and American boyfriend Dan, we head to the site for a guided tour with a 4.30am kick off.

So, I am no stranger to Mayan ruins, having treaded the well worn path to Chichen Itza in Mexico’s Yucatan peninsula back in 2011. The unique selling point here that really sets Tikal apart is its jungle destination, which means your tour is accompanied by howler monkeys swinging through the canopy, brightly coloured parrots and toucans heralding your arrival with their squawks and pisotes wandering around at your feet hoping you’ll ignore the signs about feeding the animals.

The former were kind of elusive when we got there, but here are the pisotes en masse with their antennae-like tails held high.

The Mayans settled here in 700 BC, but Tikal’s downfall was part of the mysterious general collapse of the lowland Mayan civilisation in 900 AD. However, it wasn’t until 1848 that the Guatemalan government decided to send out an expedition to the site, and now just 20% of its expanse has been uncovered and restored for our pleasure.

The temples, towering to as much as 44 metres, are a key attraction here, numbered unimaginatively as they are. We trek through Templo I to VI in the sunshine.

It would appear that the Guatemalan Mayans are much more relaxed than their Mexican counterparts, and you are allowed to scamper up and down these temples to take in the views across the jungle’s vast expansive canopy

…however if you were determined to flout convention, some of these signs could give you ideas.

Inside the temples, we can see some of the rooms in the complex and get an idea of Mayan life. I can see that they were not turntablist fans… 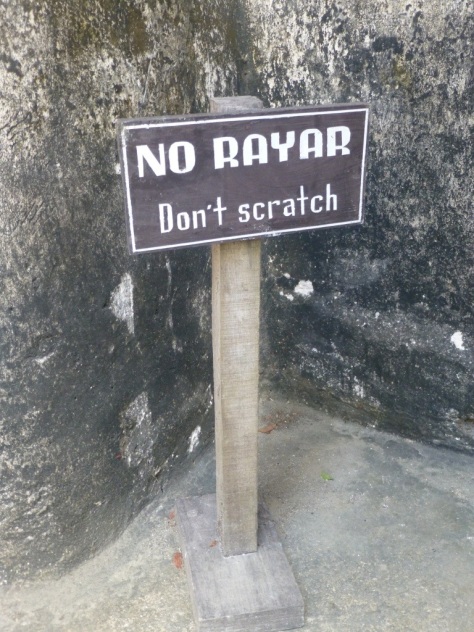 There is beautiful wildlife along the way like this Montezuma Oropendula bird, a yellow tailed tropical bird, whose nest hangs from the tree…leading to rather obvious and unflattering nicknames.

It’s a place for spiritual connection for some…

…and shameless tourist box-ticking for others.

We reward ourselves with dinner at La Luna.

The trek has inspired us for adventure, so we head out horseriding round Parque Ixpanpajul the next day. Roberto has a wild stallion who is bucking and rearing all over the place, whereas Dan’s horse seems to be on a Belizean go slow and is the complete opposite of the spectrum. My horse, Arbe, is somewhere in the middle but it is more of a gentle plod than a rapid canter.

Afterwards, we take to the skies for a zip line across the park’s dense canopy on six lines of varying height and length. Not quite to Costa Rican standards, but exhilarating nonetheless. 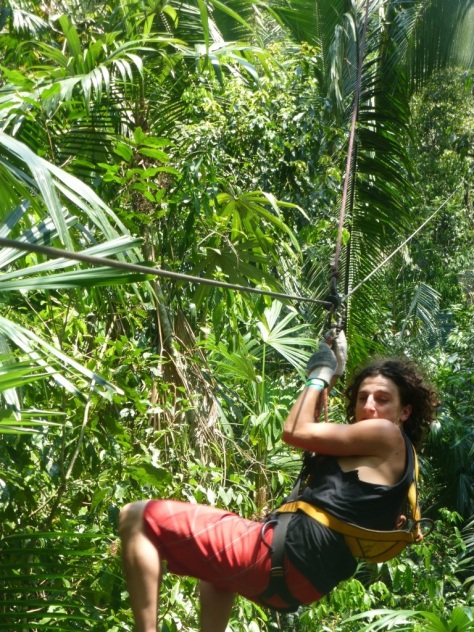 Game Elaine even goes for the ‘superwoman’ 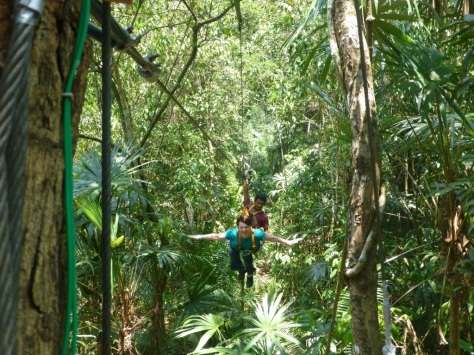 A steak dinner accompanied by mojitos completes our last adrenaline-packed day in Flores. 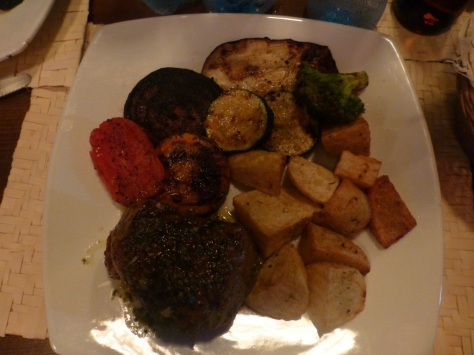 Elaine and Dan are headed for Rio Dulce while Roberto and I head south for Lanquin and chapter two of the Guatemalan adventure. The great news is our paths will cross again in Antigua next week! (I do love it when that happens on planet backpack)

Stay tuned for the next instalment… 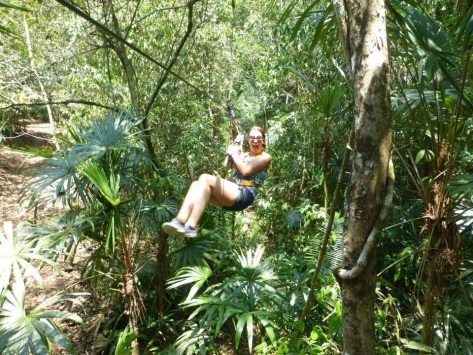